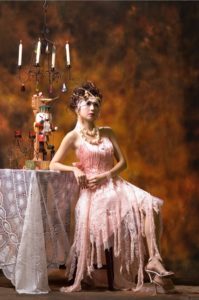 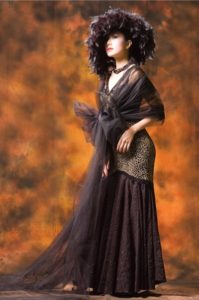 As you can see, the designs of the apparels are pretty intricate, making for a rather challenging shoot to showcase all the delicate details.

This set of images was originally taken for a featured fashion spread in a local fashion magazine. Designed to showcase a fairytale fantasy with a touch of glamorous socialite society lifestyle, the set featured more than a dozen different designs. Below are some of the more outstanding images from the set. 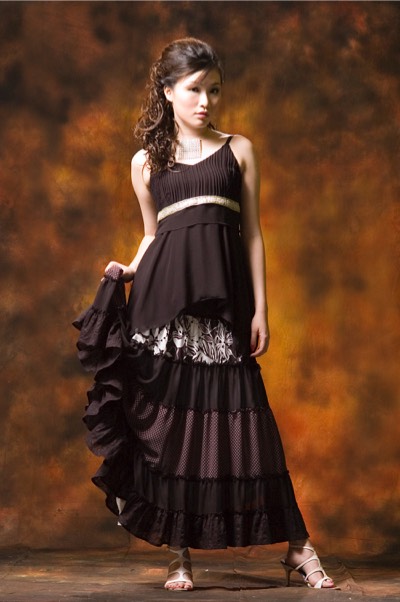 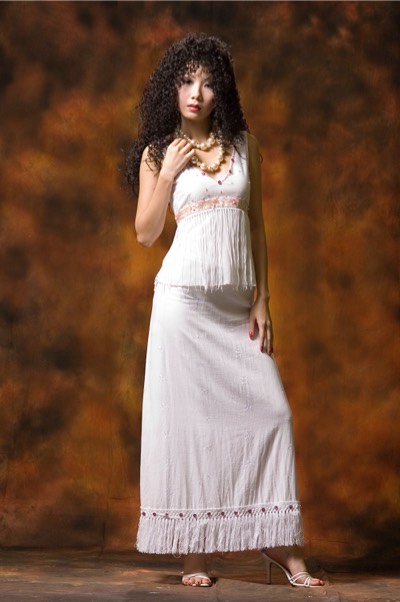 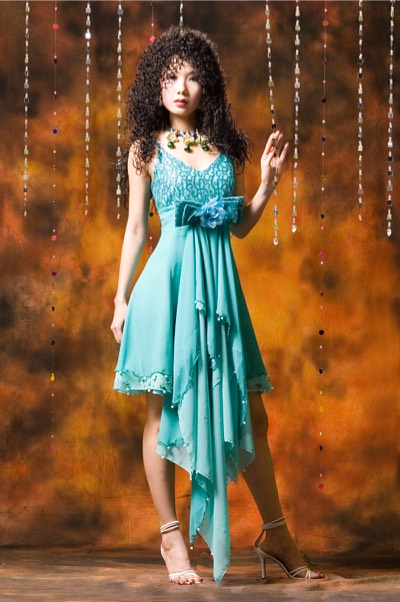 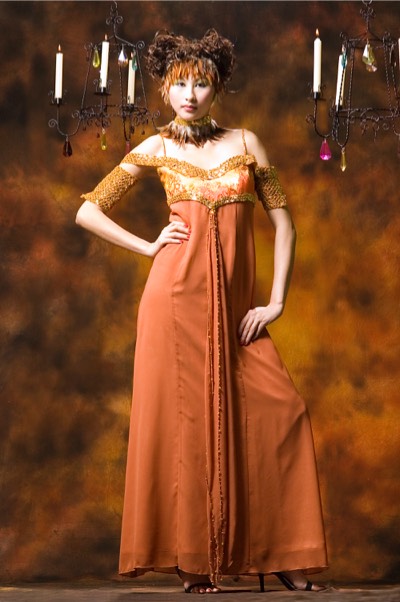 With lot’s of intricacies and detailed features in the apparel, showing them all out on the final images becomes a pretty big challenge on its own.

The only way to get a consistent flow of the shoot is to do it with controlled lighting in a studio. This is one situation where your camera mounted flash won’t do. And neither is depending on the ambient house lights.

Studio Set Up And Lighting Arrangement

This is the actual set up of the studio and lighting for the fashion shoot. And the detailed description is as below :-

In order to create a 3D image on a flat paper, I set the strobe at high power, and angled it off-centre from the subject. In this case, the main light was a strobe positioned at about 45° to the left of the subject. I also mounted high above the subject too, so that it points about 45° downwards on the subject. This creates an apparent 3D look on the subject, making all the details “pop” out from the flat paper that the magazine will be printed on.

Next thing is to pay attention to is the quality of the light. For this, I use a 115cm silver umbrella to create a semi-soft lighting effect. Hard enough to show the difference between the highlight and the shadow, but soft enough so that the details aren’t lost in the shadow area.

To make a dark subject stand out from an equally dark backdrop, nothing beats using a hair light, as discussed in an earlier article. In this case, a smaller strobe attached with a honeycomb to create a more directed light, mounted on a boom-arm stand, above and behind the backdrop.

As you can see from the images above, the backdrop was intentionally dark, so that the subject will stand out better from the background. But dark hair (or apparel) against a dark background will make it blend completely into the background, appearing as if it had “disappeared”. The only way to make the dark hair stand out from an equally dark backdrop is to light it up with a directional light, creating a lighter “sheen” off the top of the hair. This also helps to make the subject appear more 3D.

A medium telephoto lens (105mm) was mounted on the camera, positioned a long distance away from the subject (approx 10m), and only slightly above the ground level. This has the accumulated effect of creating a flat perspective, and elongating the models’ legs at the same time.

If you are using a medium format camera with a waist-level finder, you can literary place the camera on the floor to capture this perspective. I was using a 35mm format with a regular eye-level finder. So I had to lie sideways on the floor, perpendicular to the subject, in order to frame it properly.

In all, it’s not a very difficult studio set up, as long as you understand the relationship of the light falling onto the subject.

And the biggest secret of it all?… This shoot wasn’t even done in a proper photo studio. The actual location of the shoot is the fashion designer’s workshop itself. Armed with a mobile studio set up, I transformed the fashion workshop into a full-fledged photo studio, thus the resulting studio effect.

One Reply to “Lighting Technique For Studio Fashion Photography”

This site uses Akismet to reduce spam. Learn how your comment data is processed.

We have reduced the frequency of updates recently as we're spending all of our creative efforts to build our sister website Espoletta. Henceforth, we invite you to go there for the latest updates.

Enjoy this blog? Leave a comment, spread the word :)